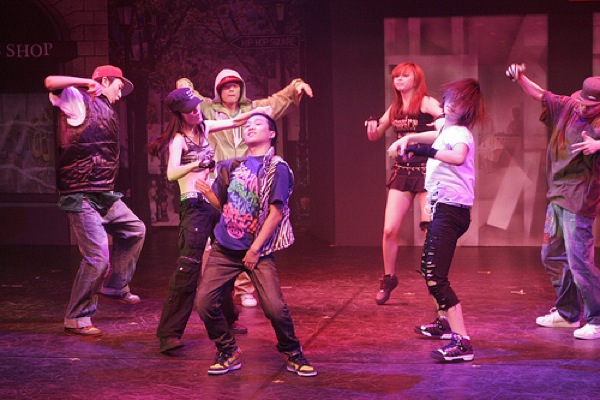 Every day at eleven, a cheery instructor would lead a hip-hop dance class at my tiny gym. Every day, I would watch them, listening hard for some recognizable Korean words (“…left arm, right arm, left foot, right foot…”). I didn’t yet have the nerve to join the dance classes, to be the only non-Korean in front of those huge, scrutinizing mirrors. Already, I was the tallest person in the gym, the only woman who, for sizing reasons, had to wear the mens’ gym kits. Dancing around might bring more bad attention than good.

One day in the locker room, a woman from the class approached me. Her name was Sunny, an English teacher turned stay at home mom. “We see you watching the class,” she told me, “so tomorrow, why don’t you join us?”

I had been in South Korea for a month, and felt no wiser than the day I arrived. I had always thought of myself as a sociable, adaptable traveler. For some reason though, I wasn’t meeting anyone. Simple tasks, like buying a bus token or vegetables, were unnervingly difficult. I had splurged on a gym membership with my first paycheque.

With a bare social calendar, I was free to spend long hours getting in shape. Even if I could barely navigate the subway, even if I could barely order a simple dish, the gym gave me my footing again. At least I knew how to use a treadmill. At least, I thought as I nodded to Sunny, I know how to dance.

The next day, stretching on the floor, I studied my fellow dancers. Most were housewives like Sunny, spending long hours socializing at the gym while their children attended school. They wore the kind of bright, sequined costumes you’d find on a figure skater. Camouflage, ruffles, mesh, more sequins than I ever wore in all my childhood dance recitals combined. They stood close to the mirror, fixing their ponytails. One woman wore a a plastic bag on her torso, like a child fingerpainting in a garbage-bag tunic. This was apparently a do-it-yourself method of sweating off the pounds. Her dance moves were accented by a squeaky plastic sound.

The instructor called us to attention and we found our places. Sequined women in the front, older women and me at the back. Never mind that I was half the age of the people around me, we were in it together, moving through the warm-up stretches. This wasn’t so bad.

Warm-up complete, it was a whole new game. Korean pop songs filled the room and the group transformed into a single entity, moving through a routine in perfect time with the ever-grinning instructor. I flailed around, red-faced, trying to keep up. It felt like I’d just jumped onstage at Cirque du Soleil. Everyone knew exactly what they were doing, and I didn’t.

The class, I later deduced, consisted of choreography that built on itself, week after week. These women had been learning and practicing these routines for months. What did newcomers do? Well, it rarely came up. I was the only newcomer to enter the group in a while.

Sunny approached me after the class, “that was fun, right?” She looked at the shining sweat on my face and arms. Her own skin was beautifully bone-dry. “Have you ever danced before?” Of course I didn’t tell her yes, that I had danced for most of my childhood, that it shouldn’t have been so hard.

She took me by the hand and introduced me to the group, translating their welcomes into English. Someone handed me black instant coffee in a tiny paper cup. A woman in a ruffled flamenco blouse and leather shorts eyed me up and down, then offered to take me shopping for “better clothes.” The instructor gave me an encouraging pat; the kind you give to a toddler who makes a shapeless pile in the sand and calls it a sandcastle.

The next day, I came back to the class. The day after that, I came back. I would glimpse at myself in the mirror, my men’s T-shirt sweat-stained, my ponytail frizzing, my mouth tensed in a thin line of concentration. I didn’t have any sequins on my clothes. I didn’t go on post-class lunch dates with girlfriends. Here, I didn’t have any girlfriends. I didn’t know enough Korean to understand the teacher’s instructions, or the class banter. But I could get better at dancing.

At night after work, I would scour YouTube for the latest K-pop videos and mimic the dancers for hours. The Internet was full of homemade clips, teenage girls dancing in their living rooms to Tell Me and So Hot. I would use my glass balcony door as a full-length mirror, not caring that passing pedestrians could see me hopping around.

At my language school, I would round up the little girls in my class and dance with them. “Na Yeon, do you have your mobile phone? Good, play Tell Me. Everyone line up…aaand, go!” The children, despite eight hours of school and four hours of supplementary classes daily, had found the time to memorize that choreography too. Their eyes would bulge at the sight of me copying them. “Anne Teacher!” they would say, grins on their faces, “do you want to be Korean?”

It sounds a bit obsessive, slaving over the dance moves to saccharine pop songs that I didn’t even like. But to me, it became a mission. Bouncy hip-hop dancing would be my “in” to Korean culture. Some expats sample every type of kimchi under the sun or study Korean until they’re fluent. Some take to karaoke rooms and rice liquor binges. I would get to know the culture through its pop.

I knew that with my fellow gym-goers, I would never fully fit in. I would never be able to follow their rapid locker room chats or stomach the bittersweet instant coffees they drank with gusto. Even without the language barrier, I wouldn’t relate to those young mothers with workaholic husbands. But while I was a cultural outsider, I vowed not to stand out in our dance routines. I would dance just like them.

Each morning at the gym felt a little better. One day, at a post-class party, Sunny served as my ever-keen translator. Though my Korean was still shaky, people were chatting with me. Even the woman in a plastic body-sheath gave me a tight nod.

“They want to tell you your dancing is good!” Sunny said, poking me amicably on the bum, “like real hip-hop.” The instructor said something and everyone looks at my bum this time, smiling. Sunny piped up proudly, “she says you can dance like this,” – wiggling her narrow hips stiffly – “like Jennifer Lopez. With your bottom. For Korean women, it’s hard.”

By this time, I had widened my social network. I had told my new friends about the hip hop classes, and how hard I had studied these pop dances in order to fit in with the class. When I reenacted the bum-admiration, they laughed. “Maybe that’s why they wear the bright costumes,” one friend mused. “They want to look like hip-hop dancers, even if they just don’t have the shape to dance like one.”

It seemed I wasn’t the only one struggling to fit the part. In fact, I was one of thousands. The keen expats labouring over Korean grammar books, the housewives shopping for leotards together, the teenage girls dancing in sock feet in their living rooms. Maybe we’re all fitting in slowly.