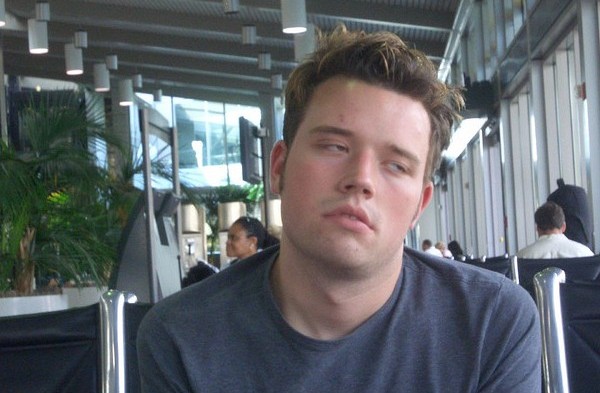 Title & Link: How to NOT be a jerk at the airport

THE STINK PARADE is how my friend Mark refers to the processed feel of long haul travel. In airports, we always crack jokes about it. Everyone comes off a plane looking disheveled. Everyone could use a shower. Passengers shuffle in a dazed lockstep to the next terminal or the immigration queue.

Fashion columnists often pine for the golden era of air travel, when passengers wore suits and not sweatpants. Me, I couldn’t care less what people wear in transit. What gets me steamed is bad behavior, like the righteous travelers who think social cues are waived in the limbo of air travel, or the impatient travelers who snap at flight staff and demand convenience. Even the clueless travelers, so dazed and weary, they forget those small acts of courtesy.

Below are some ideas for more conscientious and less jerky airport behavior because, no matter where we’re going, we’re all in the stink parade together.

Have your credit card ready.

At Incheon airport a few weeks ago, I lined up at a sandwich shop behind a guy trying to pay in Euros. “I’m sorry,” the sheepish cashier said, “We take Korean won, American dollars, or Japanese yen.”

As the queue grew longer behind us, I assumed the man would pull out a credit card. Instead, he rapped the 10 Euro note slowly on the counter, shaking his head in a show of disbelief. “This is a global currency,” he told the blushing cashier. “It’s the 21st century,” he grumbled back to me and the rest of the line, no doubt expecting some rallying compassion from his fellow customers. We knew what century it was. And we were still waiting to order, bud.

As a Canadian, I’ve never assumed a foreign airport will take my currency (though sometimes curious clerks ask to look at the banknote that depicts a pond hockey game). It always strikes me as funny when people make that presumption. Ninety nine times out of a hundred, that traveler has plastic in his or her wallet. It’s not an issue of convenience at all, but one of pride.

For the sake of everyone in line behind you, let’s focus on the convenience.

We’ve all felt the pain of departure lounge limbo. A fat five hour connection. A budgeter’s overnight stopover, sleeping in the airport. We’ve got work to do, emails to write, or hours to kill with Plants vs Zombies.

In my flying experience, most airports are lacking in plug outlets. At any given time, there are dozens of flyers shuffling around departures, seeking a warm, quiet corner to juice the laptop in peace. That’s why it’s especially frustrating to find outlets rigged to the brim with one traveler’s laptop, phone, ipod, and e-reader.

I understand the instinct to charge up everything. That’s fine. But if a fellow traveler walks up with their tech gear in hand, don’t avoid eye contact and reach for the earbuds. Share the sockets!

Another outlet tip: while technology is increasingly indispensable and blah blah blah, please don’t charge your bulky tech under the drinking fountains or in the doorway of the washroom. Just take a walk and find a convenient outlet that isn’t under foot traffic. Asking dozens of strangers to “watch it” when they’re desperate for facilities invites dirty looks, or worse.

I get cuckoo-bananas frustrated with moving sidewalk idlers. Here’s my two cents, plainly put: If you’re able-bodied, you shouldn’t be standing still on there.

The moving sidewalk is a tool of efficiency, not laziness. The purpose is to minimize connection times, not to reach the gate at the same rate as walking but with far less physical exhertion. Move. Your. Legs. Those poor muscles need some action before stiffening up in an airplane seat.

For those who don’t do the walk, I get it. I know that some airports are like three kilometres wide, and it’s not easy for everyone. Just stick to one side. Simple. Don’t flop your bags down. Let people pass. Don’t make them climb over your duty free shopping. For travelers making rapid transfers, the moving sidewalks are a lifesaver.

Don’t fish for an upgrade.

On my first solo flight, I overheard a couple at a check-in desk using every line in the book. “My husband’s a judge! We’re on our honeymoon! We’re very loyal customers! Did I mention he’s a judge?” The clerk got impatient. The couple was oblivious. It was uncomfortable.

When checking in, there’s no harm in asking to be considered for an upgrade. But ask once and let the check-in staff do their work. They’ve heard every line a hundred times, and they’re largely immune to schmoozy charm. I’m pretty sure it’s part of the job training. I’ve never met anyone who has successfully sweet-talked their way into first-class. In my opinion, it’s the Pop Rocks and Coke story of travelers…an urban myth.

There are tales that float around about the pre-digital booking days, when air crew had all the control over the seating plan. Nowadays, electronic manifests mean that any changes to passenger seating are monitored by the airlines. Also, many airlines have a firm policy against arbitrary upgrades. The stewardess aww-ing at your honeymoon status couldn’t slip you into first class, even if she wanted to.

Most no-cost upgrades are given to remedy an inconvenience, like getting bumped from overbooked flights. Again, it doesn’t hurt to inquire. Just don’t lurk around the desk or take up the staff’s time when they’re trying to check in a hundred other passengers.

I’m always shocked to see this. Some travelers bust out the big eye-roll whenever they catch a glimpse at a child, no matter how quiet and well-behaved. In smarmy moods, I’ve been known to counteract the scoffer by loudly telling the parents, “Your kids are so well-behaved! Can I help fold up that stroller?”

Travel with little ones is stressful. It’s ten times the handful of solo travel. Don’t make it worse for those parents by acting as if their babies are calculating sociopaths who plan to scream in your ear just for shits and giggles. They’re children. Your passive-aggressive eye rolling accomplishes nothing.

I won’t deny that babies and toddlers usually make noise on flights. For what it’s worth, I’ve had many flights with babies and young kids, and few of them were imposingly noisy for longer than a couple of minutes.

More common on my flights are the chatty drunks, the guy farting in his sleep, the shrill bachelorette party groups, and the couple who requests one blanket to share. Air travel ain’t classy, gang. Cut the young family a break.